A fascinating discussion rehearsing the debate about what-is-and-isn't-jazz in a generally civil exchange is taking place at A Blog Supreme and this post here.


One of the contributors linked to a superb interview with Duke Ellington conducted in Sweden in 1973. The Duke speaks eloquently on the vexed issue of 'jazz' but also on 'music', 'taste' and 'money', his perceived relationship between the three drawing some flint. Here is the film:

Googling the 45 rpm version of EKE’s Blues in Orbit album recently, against an on-line auction in which I was interested, I happened across this clip on Youtube.
It is film of bassist Pierre Boussaguet and pianist Alain Boussaguet, recorded in 2009, laying down tracks for their album Still Dukish.
Despite the title Youtube have given to the piece, the composition is, in fact, Blues in Blueprint. A rare composition, not often performed, this recording is a treat! Their album is available here.
Posted by Ian at 02:29:00 No comments:

Stomping at the Savory

Here is a link to The New York Times and the most marvelous piece of breaking news.

Howard Carter could not have been more excited by the prospect of excavating untold treasures than Loren Schoenberg must be auditing, at last,  the collection of jazz recordings made by William Savory which have been donated to the National Jazz Museum, Harlem.

It seems no exaggeration to say that these recordings may well make a shift in the geography of the landscape of classic jazz of seismic proportions, allowing us to look afresh at the work of relatively unacknowledged masters like Herschel Evans.

And, here, too – another page in the scrap book, a video of the processes through which the sounds are being coaxed from these venerable aluminium platters which could not find a happier home commercially than on the Mosaic label, on which point, more breaking news here.

Fit for the Queen 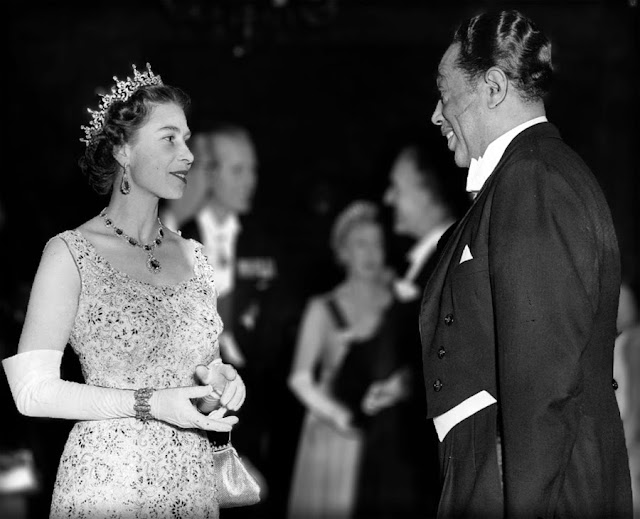 This is it. This is everything I would hope jazz in the twenty-first century might be: the classical forms of the music, the charts themselves even, an inspiration for new generations of young musicians, a departure point from which they can then make their own way.
I read some while ago on Sebastian Scotney’s excellent London Jazz site that Peter Edwards, Musical Director of  The Tomorrow’s Warriors Jazz Orchestra has the ambition to perform Duke Ellington’s Queen Suite for Queen Elizabeth II herself. It was written for HM The Queen fifty years ago last year (my earlier post on the subject is here). Ellington had the recording pressed privately and sent as a gift to the Queen. He never performed the suite for her. The ambitions of Tomorrow’s Warriors – should they be realized – means the circle will be completed.
Updates on the project can be received from the site dedicated to this new incarnation of The Queen’s Suite here.
There is an appeal at the moment for funds to complete a film by Corine Dhondee about the project. This is the trailer for that film. It has made my day.
Posted by Ian at 01:41:00 No comments: