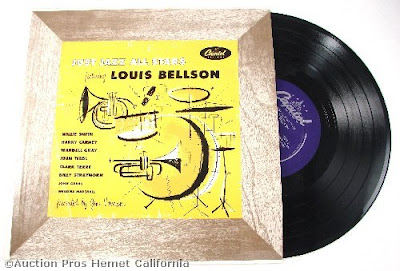 Louie Bellson was a Titan of the music scene, his deathless recording alone of Skin Deep with Duke Ellington in 1952 sufficient to translate him, in imagination, to the realm of the gods.

The title of the piece is clearly a pun on Bellson’s instruments of choice but after reading in the obituaries this week that following his employment by Ellington, the band embarked on a tour of the south and the band leader decided he would say the drummer was Haitian to avoid confrontation, one could be forgiven for thinking that 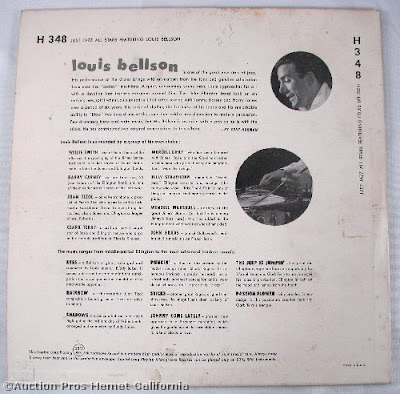 The session was laid down on 23 May, 1952, Louie appointed leader perhaps on the strength of that immortal record with Duke Ellington.

Recorded at the Capitol Studios, Los Angeles, the session comprised eight sides which were released under the title Just Jazz All Stars featuring Louis Bellson on a ten inch Capitol records, H348. I presume the record came about through Gene Norman’s regular Just Jazz concerts, the presence of Wardell Gray – a fixture of the central Avenue scene at this time and the Shrine Auditorium – perhaps offering confirmation.

Both the repertoire and personnel bear the imprimatur of Louie’s new Ellington period. With him on this date are those other two band colleagues and victims of what was known as ‘ the Great James Robbery’, Willie Smith and Juan Tizol. I will have to dig a little deeper into the discography, but Ellington’s raid on the Harry James band was about the time Johnny Hodges left his band to strike out on an abortive solo career. I find it interesting that the first number of this session was The Jeep is Jumpin’ and this is followed by another Hodges vehicle Passion Flower. The latter tune’s composer – and fellow fugitive from the Ellington fold– is the pianist here: Billy Strayhorn.

Fellow Ellingtonians on the session include Harry Carney and Clark Terry.

The balance of the titles on the session shows the influence of the ‘cool school’ with the writing of Shorty Rogers who contributes a couple of compositions and a flavour of that melodic West Coast counter point.

The elastic tenor stylings of Wardell Gray are much in evidence in the two ‘jump’ numbers from the Ellington book. Tizol’s sultry arrangement of Passion Flower is the most Ellingtonian in flavour, Bellson contributing stop-start rolls which only accentuate the Latinate flavour of this piece. His touch elsewhere on these tracks is typically subtle and light, weaving a variety of textures and patterns behind the soloists, his own brief solos the epitome of modernism – all of a piece with the warp and woof of the arrangements.

Needless to say, the centerpiece of the eight selections, in terms of solo work for the drummer, is Shorty Rogers’ composition Sticks – occurring at the crucial half way point in the session. It is the place – just before the intermission – where the extended drum solo occurs in band concerts – impressing more, usually, by its pyrotechnics than any inherent musical quality and, usually, battering the listener into submission, leaving him longing for the exit and a drink on a stick. Not Louie Bellson, however, the varied textures of whose solo here are, as ever, compelling.

For the final selections on this disc, he shares composing honours with Juan Tizol. Tizol’s exotic Rainbow framed by a couple of Bellson originals, Eyes and the languid Shadows, a vehicle for Clark Terry, beginning an association which would come full circle with their final album together recorded last year, Expedition 2.

This beautiful set straddling the traditions of the Swing Era with the newer stylings of the Modern period was a wonderful start to Louie's career as a leader and a harbinger of all that was to come. Louie Bellson's official website can be found here.