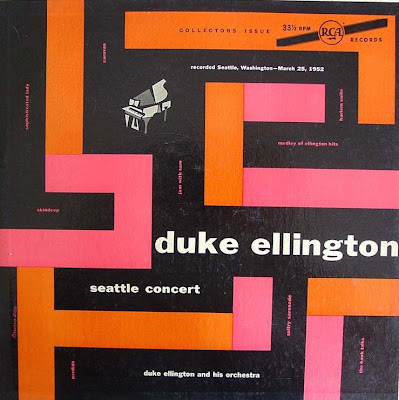 I was alerted to the fact that Wednesday last saw the fifty-seventh anniversary of Duke Ellington's Seattle concert by Kevin Kniestedt's Groove Notes site.

The concert took place at the Civic Auditorium on 25 March, 1952. According to Kevin, this was the first 'live' Ellington album.

A centrepiece of the programme was Louie Bellson's composition Skin Deep and with the drummer's recent passing, it makes this anniversary all the more poignant.

I do not know when the album was first released. With the monster success Ellington achieved with this number, maybe its presence here prompted RCA to release the concert and steal a march on Columbia? 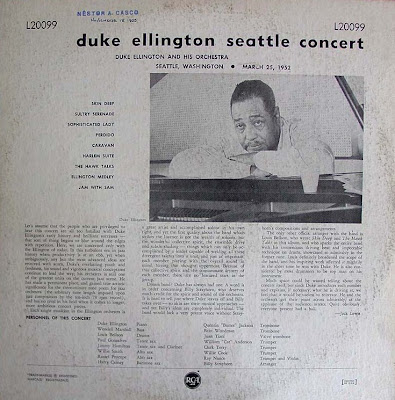 The personnel of the band on that occasion was as follows:

Jam With Sam
These selections comprise only a part of the evening's concert. A recording of the entire concert does, in fact, exist and, moreover, exists in stereo. It is in the collection of Ellington aficionado Jerry Valburn. What is worse, RCA have twice turned down Mr Valburn's offer to make the complete stereo recording available, first as an individual compact disc release and then as part of RCA's mammoth twenty-four CD Centennial Edition. In an interview with Peter Lavezzoli for his book The King of All, Sir Duke: Ellington and the Artistic Revolution, Mr Valburn is quoted as saying:
"They were very foolish, because I offered them the Seattle concert in stereo, the 1952 concert. I have it in stereo, and they didn't want to go the expense. So it remains at the Library of Congress. ... They stuck with the mono recording, and still did not release the complete performance, which by this time is rather frustrating. These things should come out!"
Amen to that. Fifty-seven years after the event, now, and still we wait for the record to be set straight. Here's hoping somebody out there can bring a new release about - if not in time for the hundred and tenth anniversary of Ellington's birth next month - then soon enough hereafter...
Posted by Ian at 17:20:00 No comments: