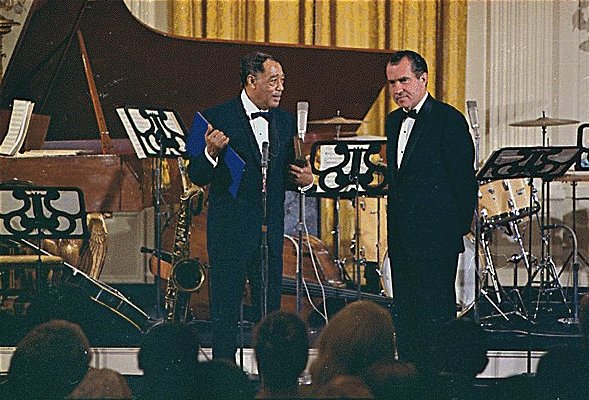 Richard Nixon's White House had a less than happy history with reels of magnetic tape. Here's one cropped up on E bay in the small hours which seems to have got away without much fuss, though.  It's the original - or so the vendor claims - recording of the tribute to Duke Ellington held on the occasion of his seventieth birthday. The vendor describes the contents of the tape thus:

April 29th, 1969 "Tribute To Duke Ellington" East Room Of The White House.
The First Generation Reel to Reel Tape recorded by The White House Communications Agency in 3 3/4 IPS.
This is the full concert with speeches by Richard Nixon including the President playing piano and leading the audience in singing "Happy Birthday".
Track listing: Take the 'A' Train; Medley: I Got it Bad / Chelsea Bridge / Satin Doll / Sophisticated Lady / Just Squeeze Me / I Let a Song Go Out of my Heart / Do Nothing Till You Hear From Me / Don't Get Around Much Anymore / In a Mellotone; In a Sentimental Mood; Prelude to a Kiss; Ring Dem Bells; medley: Drop Me Off in Harlem / All Too Soon / It Don't Mean a Thing (If It Ain't Got That Swing); Things Ain't What They Used To Be; Perdido; Warm Valley; Caravan; Mood Indigo; medley: Prelude to a Kiss / I Didn't Know About You; Praise God and Dance; Come Sunday; Heritage; Jump for Joy; Pat.
Personnel: Duke Ellington, Dave Brubeck, Earl Hines, Hank Jones, Billy Taylor- piano; Paul Desmond- alto saxophone; Gerry Mulligan- baritone saxophone; Jim Hall- guitar; Urbie Green, J.J. Johnson- trombone; Bill Berry, Clark Terry- trumpet; Milt Hinton- bass; Louie Bellson- drums; Joe Williams, Mary Mayo- vocal.
Until a few years ago all that was available of this historic event was a cassette tape and more recently the VOA (Voice of America) tape has surfaced. I believe the reel to reel up for auction is the first generation tape from which all others were made.
The quality of the recording is simply outstanding. The tape has been carefully stored and no deterioration of sound quality has occurred. Side by side comparison to the available CD marks this tape as far and away superior in sound quality, crispness, content, and overall feeling that the listener is "in the room".
This is a one of a kind item. The length of the event on tape is 91 minutes, starting with R.M. Nixon speaking about Duke Ellington, and ending 90 minutes later with Duke performing a piano solo simply entitled "Pat". 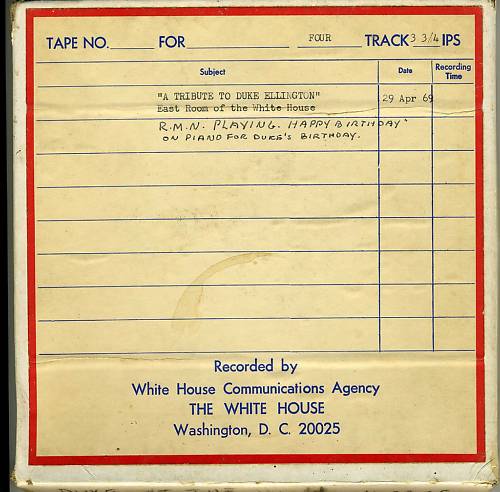 If you have $3,700 to spare with which to start the bidding, brother, full details are here. 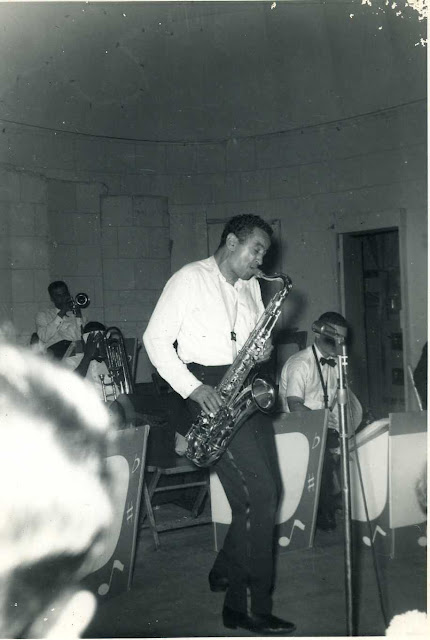 
on the occasion of the ninetieth anniversary of his birth.

Sunlit is the only word to describe the life and career of Joya Sherrill as these further pictures from a cache of copyrighted Life photographs illustrate. 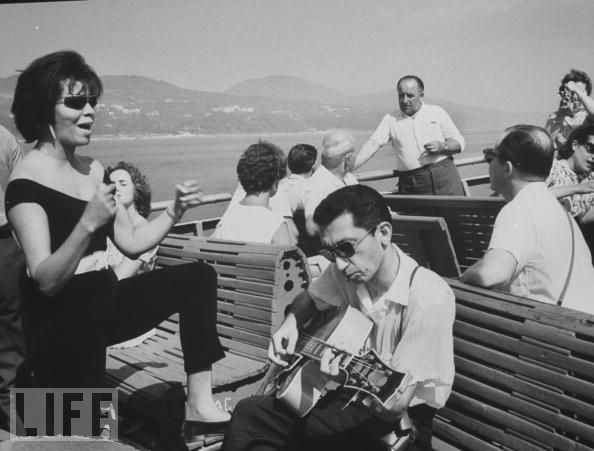 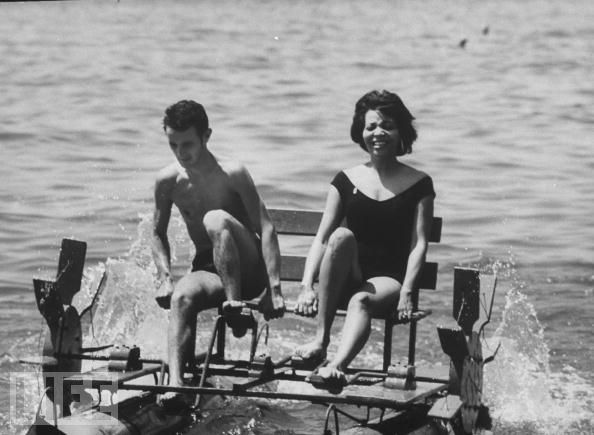 Whether it was returning to school after her first tour of duty with the Ellington band in the early forties, stopping the show with her rendition of Katusha on Benny Goodman’s mission to Moscow in 1962 or her numerous returns to the Ellington fold to participate in the album My People or to appear at The Rainbow Grill, hers is a rich legacy.


Anyone about my age now but who grew up in New York, may well remember the children’s shows she presented, Time for Joya and Fun School. In the era, I suppose of Sesame Street, Joya’s programmes were syndicated locally. Typically, tapes of these programmes apparently no longer exist but on this page, there are links through to the only surviving sound recordings of the shows and they comprise a guest appearance by Duke Ellington. The recordings are priceless.

Here is a brief reminiscence of some of her finest early work - from standards she created during her first stay with the Ellington band such as I'm Beginning To See The Light and I Didn't Know About You delivered with malted milk smoothness to fine, rare work with Rex Stewart at Capitol and her appearance at Carnegie Hall in January 1946, singing The Blues from Black, Brown and Beige.