Paris Blues to be There! 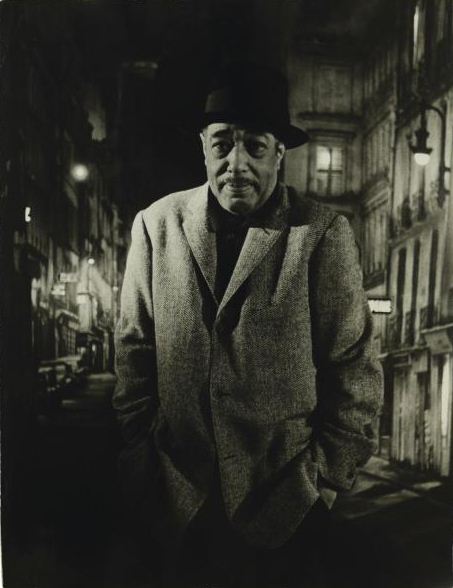 Laurent Mignard and the Duke Orchestra will be performing three concerts in Paris on 21, 22 and 23 of April. Full details here.

And here is the promotional video:

So Near and Yet So Fargo...

I’m going to have to stop looking on Ebay. For auction presently is some memorabilia associated with the late Jack Towers, an audio engineer who famously made a ‘bootleg’ recording of the great Blanton Webster edition of the Ellington Orchestra at the Crystal Ballroom in Fargo, North Dakota on 7 November, 1940.
I have the Storyville double CD set and two copies of the first official release on Book of the Month Club Records. The acetates, photographs and autographs assembled in the following lot, however, are going to be beyond my pocket book, however. I detail the auction and photographs of its concerts for the historical record only, then. The vendor writes:
"This is a very rare collection of memorabilia from Duke Ellington's appearance at the Crystal Ballroom in Fargo, N.D.
Included in this collection:
78 rpm record sleeve signed by all members of Duke Ellington's Band from this historic night! Including Duke!!! 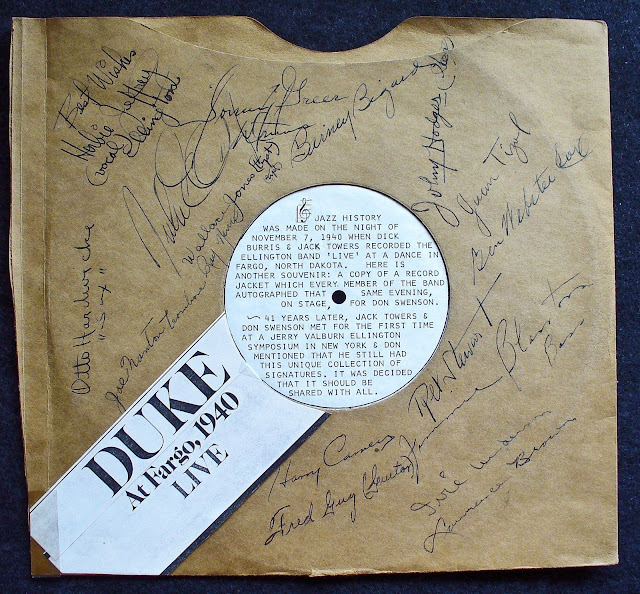 This is the actual sleeve with autographs. This is NOT a copy. It has had a few added details that were added to make copies for other collectors.
There is a letter from Jack towers to Don Swenson regarding the photos from the historic event. 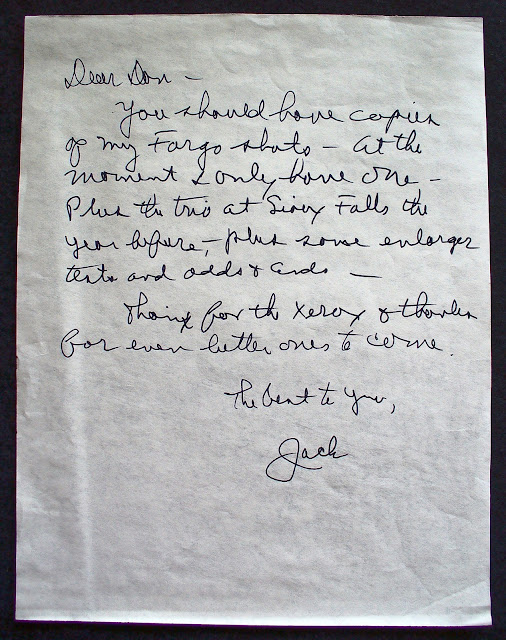 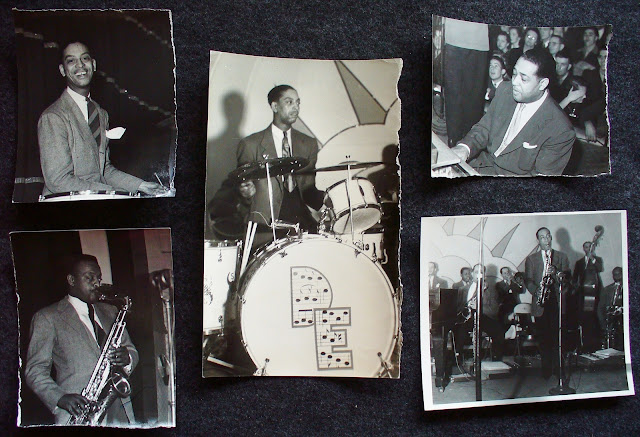 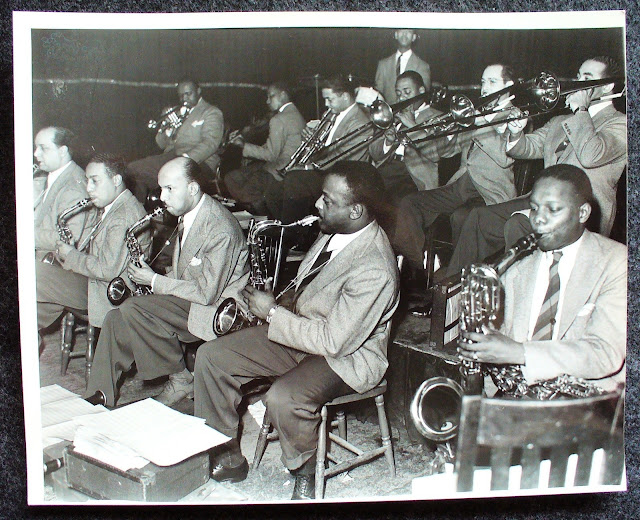 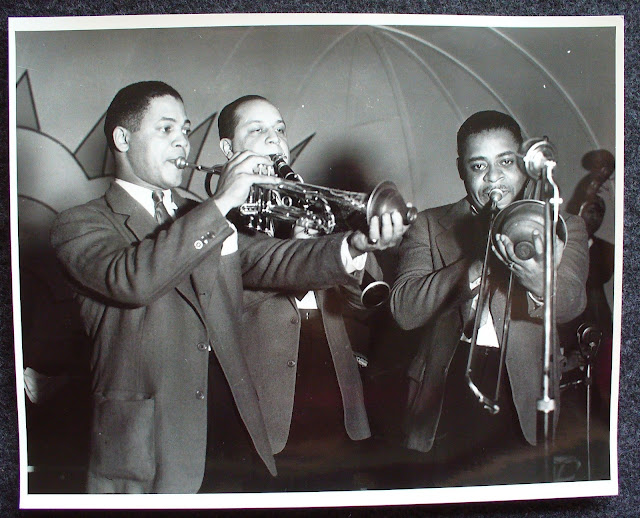 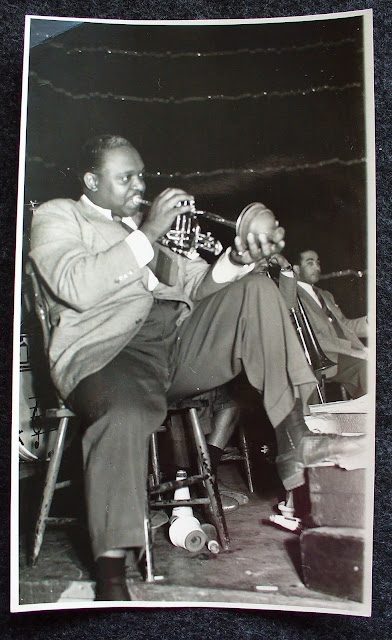 These are the actual photos mentioned in Jack's letter. They are NOT copies.
Several of these photos were used on the sleeve of "The Duke 1940 / "live" from the Crystal Ballroom in Fargo, N.D." Jazz Society AA 520/521. Jazz Society AA 521, two record set, made in Sweden, microgroove, vinyl VG+ or better, gatefold sleeve NM- s3b1
Recordings included are:
Emidisc (7 / 8) Fargo, N.D. Nov. 7, 1940...Rose of the Rio Grande / Boy Meets Horn / Way Down Yonder In N.O. / Oh Babe, Maybe Someday / Five O'Clock Whistle / St. Louis Blues ...10", made in Great Britain, excellent condition, would benefit from light cleaning.
Emidisc Queen Elizabeth Suite, April 1959...10", NM, made in Great Britain, beautiful, light finger smudge...Sunset & the Mockingbird / Lightnin' Bugs & Frogs / Le Sucrier Velour / Northern Lights from Quebec / A Single Petal Of Rose / Apes & Peacocks
Emidisc (1 / 2), 10", Miscellaneous Broadcast & Concert Excerpts (1941-2) , VG++ or better, very nice, some light signs of age/storage.
Label on sleeve has a track listing...not sure if this is accurate to this record or not. It was in this sleeve. 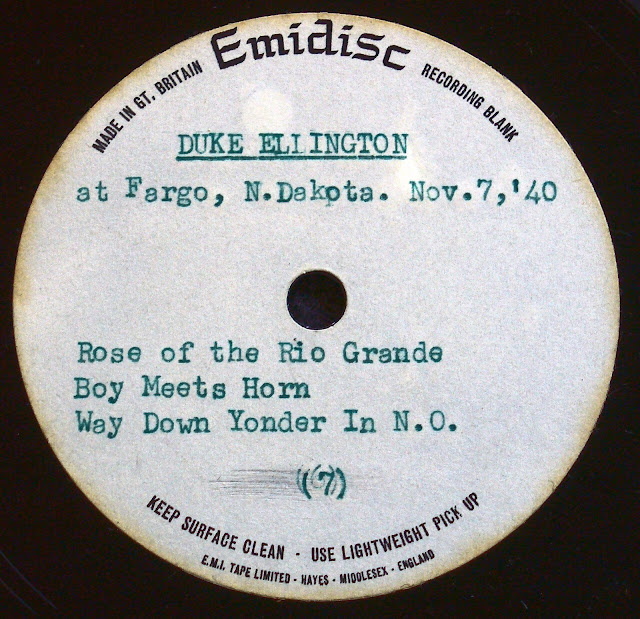 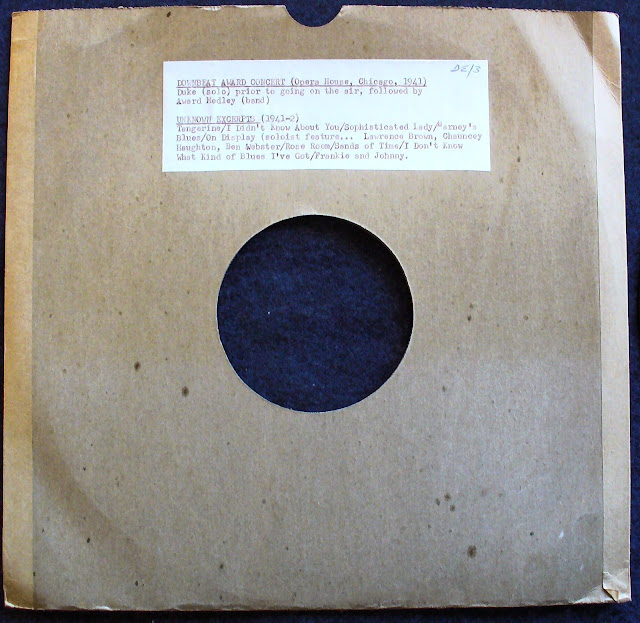 Please keep in mind that these records are very fragile & will reguire special packaging & handling. I do my best to get items to you safely.

Also includes:
two photocopies of Duke Ellington ads/marquees.
In 1939, two cooperative extension service workers and former South Sakota College students, Jack Towers and Richard Burris, sought permission from the William Morris Agency representing Duke Ellington to record an upcoming concert in Fargo, North Dakota. Permission was granted to the two Ellington fans provided they receive permission from Ellington and the venue's manager before the show.
The show was held on 7 November 1940 at the Crystal Ballroom on the second floor of the Fargo City Auditorium at the corner of First Avenue South and Broadway. (The building was demolished in 1962).The concert was a dance, a normal venue for jazz bands at that time but an unusual setting for a live recording, most of which would have been made of concerts, nightclubs, or radio broadcasts. The Crystal Ballroom featured a glass ball two feet in diameter hanging from the ceiling that reflected the dancehall's lights.
The original recording of At Fargo was effectively an amateur, bootleg recording, albeit approved. The recording equipment included a Presto portable turntable that cut the recording into 16-inch, 331⁄3-RPM acetate-covered aluminum disks. The recording turntable was set up next to Ellington's piano. Five and one-half of six disks with a recording capacity of 15 minutes per side were used in the recording. A Fargo radio station, KVOX (now KVXR), broadcast part of the show live. 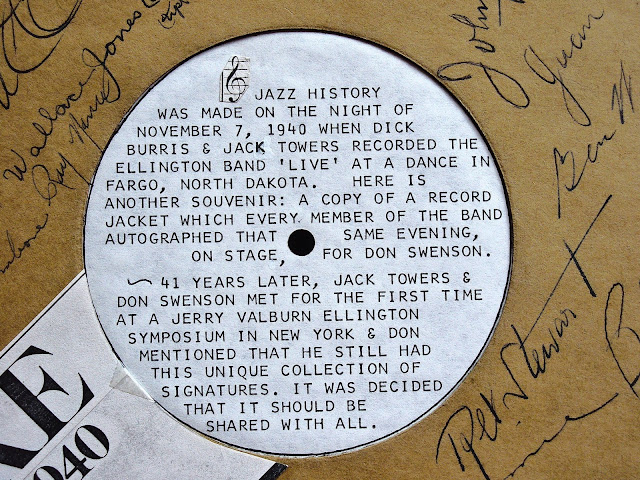 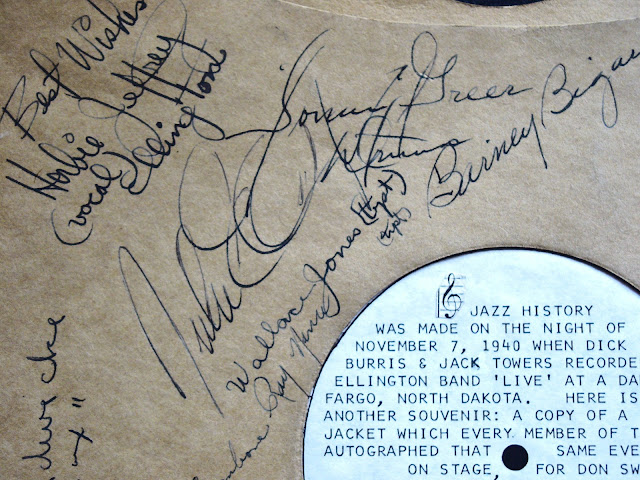 After the show, Towers and Burris played parts of the recording for Ellington and his band mates.

Jack Towers later said, "When Dick and I recorded this Fargo performance, we did it just for the excitement and pleasure of it all. We had no idea that people all over the world would be listening to it 60 years later."
Burris and Towers had promised the William Morris Agency not to use the live recording for commercial purposes and it was heard only from the original disks until the 1960s. Towers dubbed a tape for an acquaintance and subsequent copies eventually appeared in Europe.
Towers was in charge of radio broadcasting at the U.S. Department of Agriculture  from 1952–1974 but remastering recordings remained a hobby and became a career after his retirement.
In the 1970s, Towers made a reproduction of the recording from areas of the groove that were less worn. In 1978, Towers' master of At Fargo was finally officially released by Book-of-the-Month Records."

You can follow the progress of the auction here.
Posted by Ian at 05:36:00 No comments: 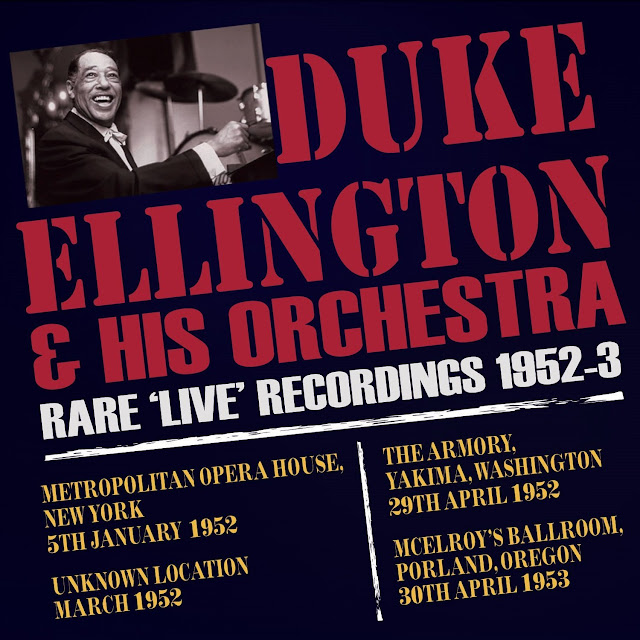 Released next Monday in the UK is a 3CD set on the Acrobat (European ‘grey market’) label entitled Duke Ellington and his Orchestra Rare Live Recordings 1952-3.

The producers claim that amongst the material are some recordings which have never been released before.

“The recordings in this collection come from the Ackerman tapes, an archive held in Stanford University in California comprising live jazz recordings, many previously unreleased. The recordings come from four separate live performances by the Duke Ellington Orchestra, with three from Jan.-Apr. 1952. The entirety of CD1 and the first two tracks of CD2 comprise a concert on 5th January 1952 at New Yorks Metropolitan Opera House, which is previously unreleased in any form, apart from one track. Tracks 3-9 of CD2 are from a performance at an unknown venue during March 1952 in the US North-west, and Tracks 10-18 of CD2 and Tracks 1-4 of CD3 are from a show at The Armory, Yakima, Washington State on the Dukes birthday 29th April 1952. Several tracks from these performances have never been released, while the remainder have only ever been on vinyl. The remainder of CD 3 comprises 1953 recordings are from a dance date at McElroys Ballroom in Portland Oregon, a favourite gig of Ellingtons during his regular tours of the north-west around his birthday, which have appeared on vinyl and CD, but not, we think, all on one CD. In all, of the 45 tracks, 20 are previously unreleased, 15 have only appeared on vinyl, while the other 10 have been on various CDs, now generally unavailable, we believe.Some of the recordings include Ellington's characteristic and entertaining links and introductions which add a unique flavour and atmosphere to the collection.It is a snapshot of a great orchestra under an iconic leader during a period when the big band market had been hit by post-war austerity and the emergence of bebop and R&B small groups, and one-night stands like these were its bread-and-butter work. We are sure that it will provide a welcome addition to the collections of Duke Ellington and big band enthusiasts.”