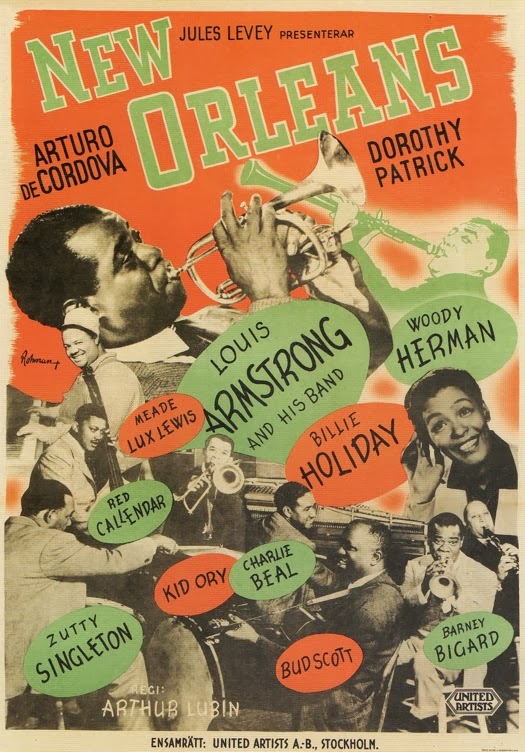 Surfing the net earlier today, I discovered the Center for Jazz Studies at Columbia University and details of a talk held there on 28 February 2013 by Professor John Szwed on The Story of Jazz. Ellington aficionados will know that this is the collaboration between Duke and Orson Welles which unfortunately never got off the drawing board. It transmogrified, eventually, and after a fashion, into A Drum Is A Woman. I've emailed Professor Szwed in the hope that the text of his talk is available. In the meantime, I discovered the video, below, which, I'm sure, in part, covers this fascinating project.

The video and the programme notes copied below are from the Louis Armstrong Symposium held at The College of Staten island in 2009.

In 1941 RKO announced that "The Story of Jazz," an Orson Welles film, was in production, with Duke Ellington as musical director, and a cast that included Louis Armstrong, Hazel Scott, and Kid Ory. It was to be a bio-pic of Armstrong, and was a serious production, with several scripts, an interview with Bud Scott modeled on the 1938 Alan Lomax interview with Jelly Roll Morton, a short autobiography of Armstrong he wrote for the film, Ellington was under contract, and test shots had been made. But as often with Welles, things went wrong, and the jazz concept was sidetracked for the story of Brazilian Carnival in the three-part film, "It's All True," which was never completed. (Another Welles' 1941 production also failed, a film of Ellington's "Jump For Joy.") Many questions remain about the Armstrong film, including how it morphed into the infamous 1947 film, "New Orleans," and why the script of "The Story of Jazz" was so similar to that of another 1941 film, "The Birth of the Blues."
This talk is an attempt to explore the 1941 Welles' productions, and will look at some of the scripts by Elliot Paul, as well as his strange 1957 book, That Crazy American Music, the Bud Scott interview, the Armstrong letter-autobiography, the "Jump For Joy Script," and a later Welles radio history of jazz for the Armed Forces Radio Network.

Genius of Duke Ellington: On Point Another programme on Duke: A Life of Duke Ellington. Tom Ashbrook interviews Terry Teachout here.
Posted by Ian at 05:21:00 No comments: 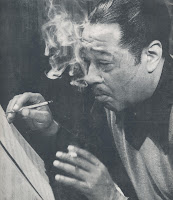 There is an interesting review up at philly. com by the appropriately named Karl Stark. The review entitled Biographer finds some dissonance in Ellington's Life may be viewed here.

This is extremely exciting: Darcy James Argue is one of the most striking and original musicians working today. His ... Secret Society ensemble has received much praise from the critics over the last couple of years.

Now Darcy has turned his attention to the music of Duke Ellington. In conjunction with The Carnegie Hall Musical Exchange, he is running a course called Arranging Ellington for young musicians aged between 13 and 25.

I'd like to take this opportunity to introduce you to Arranging Ellington, a new online arranging workshop coordinated by Carnegie Hall Musical Exchange. Together, we'll be exploring the techniques of creative arranging by considering the life and work of the incomparable Duke Ellington.

Whilst it seems necessary to be between 13 and 25 years of age to register with the course, it is still possible to watch the videos, study the transcriptions and read the blog posts. Arranging Ellington is here.
Posted by Ian at 12:21:00 No comments:


In addition to the Soundcheck podcast posted  earlier, reviews for Terry Teachout's Duke: A Life of Duke Ellington are piling up thick and fast. Perhaps the most considered is Ted Gioia's notice for the Dallas News which may be read here.

There is another interesting piece for Brain Pickings by Maria Popova entitled Duke Ellington's artistry and artifice: How the jazz icon engineered his own artistry which is available here.

A review for USA Today by Bill Desowitz may be found here.

A brief interview may be accessed here.

And finally for now, the redoubtable Mar Myers of Jazz Wax fame has posted a two part interview with Terry Part One is here followed by Part Two.


Now it transpires, video for part of that same engagement has been uploaded onto Youtube. Enjoy it while you can: this particular poster has a superb collection of French videos (see the tab page above) but they do disappear quickly. 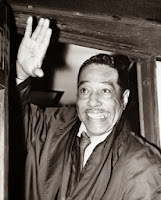 The reviews for Terry Teachout's Duke: A Life of Duke Ellington are beginning to accrue. The biography is published, officially, this coming Thursday.

Jeff Simon's review for The Buffalo News  may be read here.
Posted by Ian at 10:13:00 No comments: 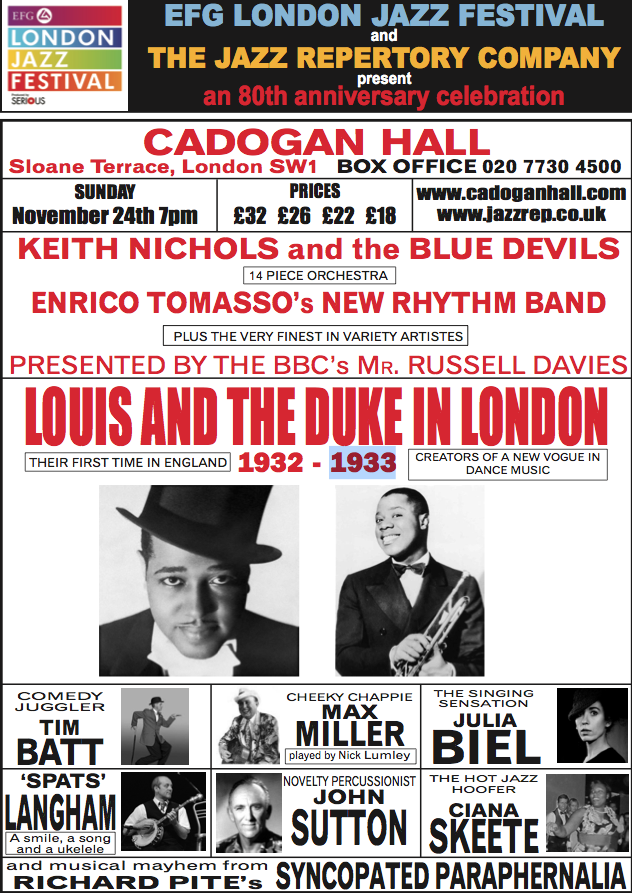 If you happen to be in the metropolis on the evening of Sunday, 24 November, Louis And the Duke In London is playing at Cadogan Hall (see handbill, above). 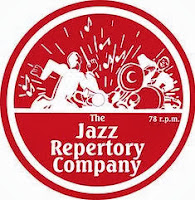 In 1932 Louis Armstrong created a sensation (and courted controversy) when he made his European debut at the London Palladium.

A year later "The Duke" Duke Ellington's Famous Orchestra became the talk of the town when they topped the bill at the same venue performing such classics as Ring Dem Bells, Bugle Call Rag,  Black and Tan Fantasy  and  Mood Indigo.
Keith Nichols and his 14 piece Blue Devils  will be recreating the sound of  Duke Ellington's Famous Orchestra in all its majesty featuring Matthias Seuffert as Barney Bigard and Colin Skinner as Johnny Hodges.  Julia Biel will perform as Ivy Anderson in Stormy Weather and It Don't Mean A Thing If It Ain't Got That Swing.

﻿At the tender age of six Enrico Tomasso played his trumpet for Louis Armstrong  and the two of them became great friends exchanging letters for the rest of Armstrong's  life.  Satchmo's influence is paramount in Enrico's style and the spirit of the greatest trumpeter in jazz lives on in his performances.   When Rico met Louis in 1968 the latter was a much loved elder statesman of jazz but in 1932  performances of tunes such as You Rascal You, Dinah and Tiger Rag sharply divided Satchmo's  audience with some hailing him as a genius whilst others walked out in disgust.
﻿
﻿Both Louis and the Duke appeared with extremely variable variety acts of the time.  (Duke was fourteenth on the bill after an evening of juggling, tumbling, magic and novelty items!).

To recreate the style of presentation we will be presenting  a selection of  fine  entertainers including Nick Lumley as Max Miller (who appeared on the bill with both Louis and the Duke) and to connect us directly with the world of show business of 1933 we have John Sutton who besides being drummer with the Bryan Ferry Orchestra, Chris Barber and the Pasadena Roof Orchestra is the grandson  of  music hall star Randolph Sutton who appeared on the bill with the Duke.   The evening will be presented by Russell Davies in the guise of both jazz historian and master of ceremonies.

Tickets may be booked here.

By way of a 'taster' of the Blue Devils in action, here they are playing The Mooche.

The Last Time I Saw Paris... 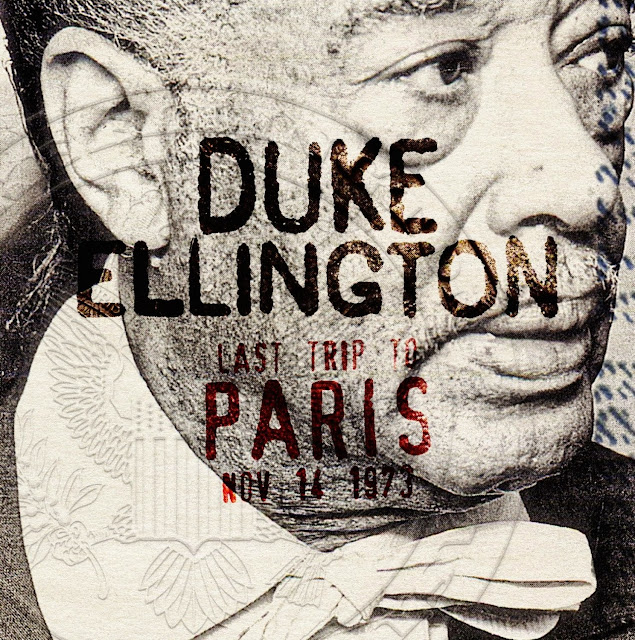 To be released on 19 November, 2013 - a little after the fortieth anniversary of the concert, Duke Ellington: last Trip To Paris is the first time this recording has been made available.

Squatty Roo's previous recent release - a CD version of Opens the Cave -  was edited and over-compressed but at least this music will be 'new'.


How much of this music finds its way onto the CD, we wait to see.