I am republishing a post on Ellington's A Drum Is A Woman from September 2009 thanks to the great generosity of a friend of this blog who posts regular Ellington videos on Youtube under the name Reminiscing in Tempo.

Seeing that the original link to Life's photographs of the TV production of A Drum is a Woman had perished, our benefactor provided a link to his own Facebook page with over 140 images from the production. Thank you so much! Follow the new link here, then, in this reposted form to access this cache of wonderful images... 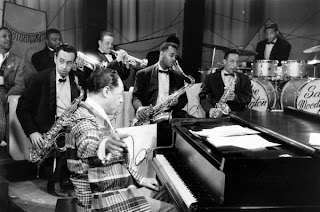 A member of the Duke-LYM mailing list recently posted a link to a splendid cache of photographs capturing the telecast of Duke Ellington’s A Drum is a Woman.

Kinescopes of the original broadcast survive, I believe. Short of viewing these recordings – well, these photographs, taken by Thomas Mcavoy for Life magazine, give some idea of the visuals that went with the music. 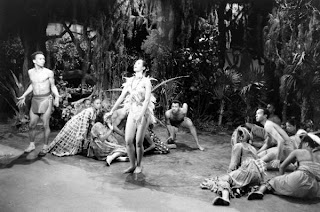 Until I saw these images, it had never quite struck me before how A Drum is a Woman must owe its lineage to those days and nights the Ellington Orchestra had been the ‘house band’ at The Cotton Club. What we have here, essentially, is a floor show - the floor, in this case, being that of a television studio.

Although one or two aspects of the lyrics may set the nerves of a modern sensibility jangling like a shop bell, the music – interwoven with Ellington’s witty, urbane narrative – is sublime.
The album has never been released on compact disc in the USA. Frustratingly two CDs worth of material (and in stereo, if memory serves) were prepared by Phil Schaap – and even assigned an issue number – ten years ago for release as part of the celebrations for Ellington’s centennial. For some reason, the release never saw the light of day. The album has been re-issued recently on CD in Europe where its copyright has lapsed but struck not, of course, from the master tapes. These beautiful prints may rekindle some interest in the project – as part of a Mosaic re-issue, perhaps?


The photographs may be viewed here... 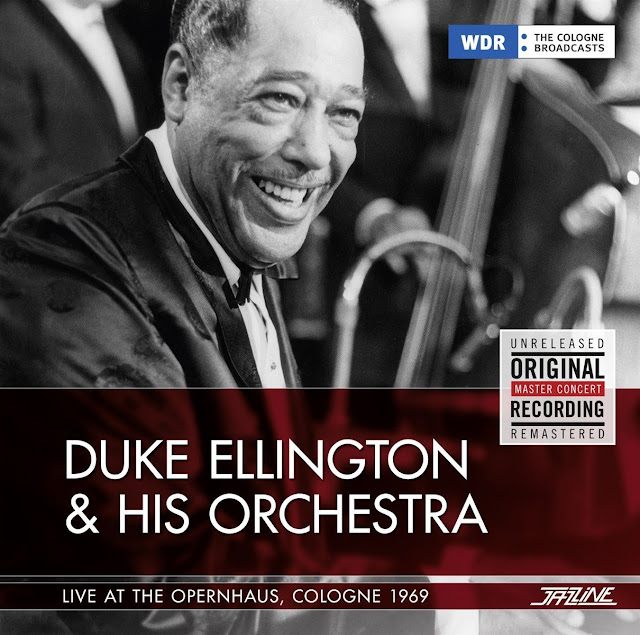 The spirit is willing...

Posted by: Jack Goodstein
As often as not when talking about the crossroads of jazz and spirituality, the music very often mentioned is something like John Coltrane’s A Love Supreme or Duke Ellington’s three sacred concerts. And deservedly so, both Coltrane and Ellington were committed to the exploration of the spiritual possibilities of jazz, and nowhere is that passion more explicitly front and center than in those iconic works. So when new opportunities to reinvigorate these works of commitment become available attention should be paid.

The release of Duke Ellington Sacred Concerts, a live recording of selections from the first and second of the three Ellington concerts in May, provides just such an opportunity. The concerts were recorded in Lüneburg, Germany in September 2015. They feature the excellent 60-voiced Junges Vokalensemble Hannover (under the direction of Klaus-Jürgen Etzold), vocal soloists Claudia Burghard and Joachim Rust, and the Fette Hupe Big Band (directed by Jörn Marcussen-Wulf, who also served as artistic director of the project).
The album opens with a 16-minute version of “In the Beginning God,” a kind of introduction allowing all of the participants to share a piece of the spotlight—soloists from the big band leading to the vocal soloists and the chorus. Other pieces from the 1965 concert include “Come Sunday,” which the composer borrowed from his Black, Brown and Beige suite. Here it’s a highlight for Claudia Burghard. “David Danced” has saxophonist Felix Petry doing the tap dancing handled by Bunny Briggs on the original. “Ain’t But the One” adds some up-tempo gospel flavor with Joachim Rust up front.
“Will You Be There” is a short piece for the choir and Gary Winters big band trumpeter who does all the spoken word work on the album. They also work together on an angelic “Father Forgive” from the 1968 concert. Winters, by the way, plays some hot trumpet on a lowdown version of “The Shepherd.” They close with a rousing long form take on “It’s Freedom.” By the way, this last and the opener, “In the Beginning God,” only seem to be available on the album.

Seniors Moment column:
The night I met Duke Ellington
Some details sketchy but not the impression of a jazz icon leading the charity band 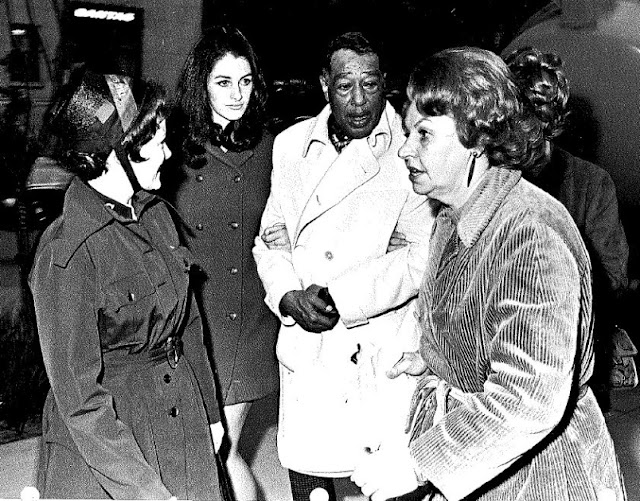 Nadine Jones, left, chair the 1970 Salvation Army funding drive, managed to get Duke Ellington to lead the Salvation Army band at it`s open air concert. Evelyn Caldwell (Miss Sally Ann) left and Jones`` two daughters were also on hand. Photo submitted
The year was l970.  The event was the annual Salvation Army’s Red Shield Appeal. I happened to be the pro bono chairperson of the event that year, so it fell on my shoulders to make it all happen. The grounds of the then Vancouver Courthouse were secured. The respected and usually staid CBC Television News anchor, Lloyd Robertson, delivered the 6 p.m. national news wearing a Salvation Army Hat and suggested that his viewers go to the show...

A lighting firm in Burnaby loaned sophistication by criss-crossing huge light beams back and forth across the sky over the area. (They did it for free but I can’t remember their name.)  Salvation Army ladies served coffee from hastily erected kiosks….coffee I had mooched from Murchies.

Jack Webster (a well-known Scottish news personality whom many of you will remember with a smile), Sweeney from Sweeney Cooperage on Granville Island advertized (From logs to Barrels. Now defunct), Gordon Wismer, (twice Attorney General of B.C. l937-41 and 1946-52), Grace McCarthy (well-know lady of many hats) and other dignitaries were “one, two, three, kicking in a snaky Congo line, much to the amusement of crowd.

The grounds were packed. The Salvation Army is a very popular organization and most people I contacted were delighted to become involved. I’m sure I’m forgetting lots of important people and happenings but, after all, it was 46 years ago.

So, being that long ago, there must have been something very impressive for me to recall the evening. And there sure was!

Duke Ellington, some would argue, invented jazz. His orchestra was the first Big Band Sound to jump on the jazz bandwagon and it brought Duke fame and fortune. Among his honours were receiving a life-time achievement Grammy award and receiving 16 honorary doctorates. He was presented with, not one, but two, gold medals from reigning presidents. He wrote songs such as Mood Indigo, Sophisticated Lady, Don’t get Around Much Anymore and hundreds more songs many of which are still played today.

Born in l899 in New York as Edward Kennedy Ellington, he was christened “Duke” by his friends because of his flair for style and his gentlemanly manner. He broke the racial barrier by playing for years at the all-white Cotton Club. He married his high school sweetheart in l916, and they were still married when he died in l974. They had one son, Mercer, and that’s where I come in. I had read somewhere that the Duke had a soft spot in his heart for the Salvation Army. Mercer was with his dad on that l970s gig to the Cave Night Club, so I took a leap of faith. I got in touch with Mercer and asked him if he thought by any chance his dad might give a few minutes to the Salvation Army. Mercer got back to me and said yes. So the time and place for a meeting was arranged….in the courthouse grounds at a given time. My two pretty young daughters brought the Duke down from his suite in the Hotel Vancouver and he crossed Hornby Street and met me and Evelyn Caldwell, Miss Sally Ann,  (who actually was great and did a tiny bit of cheesecake when asked…not much).

My two girls were duly impressed.  When I asked them now as I write this, what they remembered of the evening, my eldest girl, Lynnette, (whom I’m hiding with my head in the picture) said she remembers he had on a cashmere coat, polo style.  And Christine remembers him saying “I wish they’d hurry, I’m going to get Fresh Air Poisoning.” The girls are now both grandmothers.

Duke couldn’t have been nicer or friendlier. We had his company for only a few minutes and then he climbed the stairs and led the Salvation Army Temple Band in a rendition, of what I don’t remember.

What I do remember is that he invited my then-husband and me to his show at the Cave and backstage to his dressing room at half time.  He was 71, no kid at the time, and had spent most of his life in second hand smoke so when we went backstage he was lying on his back full length, resting between appearances. Since I was sitting behind him, I held his head up while he signed autographs. Maybe that`s why I was born? To hold up Duke Ellington’s head?

As Ed Sullivan would say, introducing his popular show for the night, “It’s a really big SHEW,” and it was.  I trust the Army made a lot of money because it was a lot of work….but certainly rewarding.

Nadine Jones is a retired journalist. 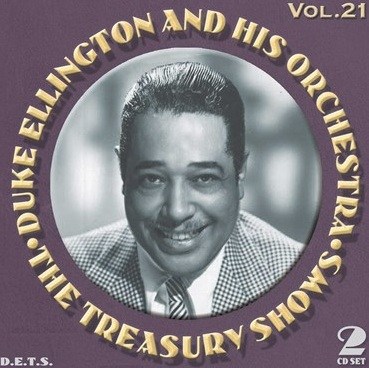 
In April 1945, to promote the sale of war bonds, the US Treasury Department contacted Duke Ellington to do a series of 55 min public broadcasts. These sessions would give Ellington a wide choice of material to perform including his older work; new instrumentals and pop tunes and his extended works as well.

This double CD contains a series of different radio broadcasts from The Million Dollar Theatre in Los Angeles, the El Patio Ballroom in Denver, the Orpheum Theatre in San Diego and the Trianon Ballroom in South Gate, California. The broadcasts are featured complete with radio speaks and encouragements to buy bonds read by The Duke himself + bonus material and extensive liner notes.

CD 1 contains a radio broadcast from The Million Dollar Theatre in Los Angeles, July 6m 1946 plus bonus tracks from a CBS Broadcast from Lakeside Park, the El Patio Ballroom in Denver, July 14, 1942.

CD 2 features a broadcast from the Orpheum Theatre in San Diedo, July 27, 1946, with the bonus tracks being from a radio broadcast in the Trianon Ballroom, South Gate, California dating back to May 2, 1942.

As a teaser for the sound found on this volume, Duke Ellington connoisseur Brian Koller, author of the extensive liner notes, writes: “It is no wonder why the Cat Anderson composition Teardrops In The Rain was a band staple for two years. The band really swings, and when it’s time for Anderson’s solo, he shows off high note pyrotechnics that few if any other trumpeters could match. Al Sears unleashes a might tenor sax solo, then the band is briefly reduced to a rhythm trio featuring Pettiford’s bass and the Duke on piano. To close the number, the full orchestra reverses the introductory themes.” Energy like that is found all through the broadcasts

Available now from musicroom.com
Posted by Ian at 03:06:00 No comments: 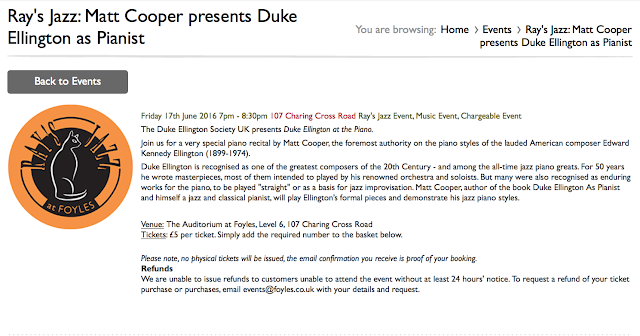