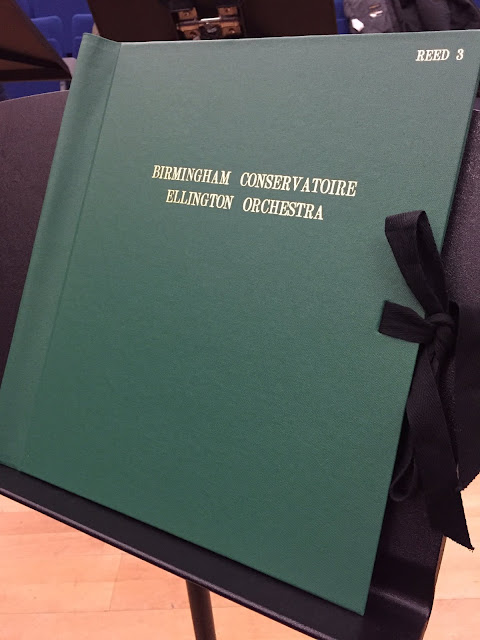 The most exciting development of recent times in the performance of Ellington music live in the UK is the formation of The Birmingham Conservatoire Ellington Orchestra under the direction of Jeremy Price.

The Orchestra gave its inaugural concert a little over three weeks ago at the Town Hall, Birmingham. It was an exceptional occasion.

In September, The Conservatoire opens a new space, The East Side Jazz Club, dedicated to the performance of improvised music. The Ellington Orchestra will play every two weeks. Live Ellington music every fortnight!

There will be regular updates as we have them. For now, here are two brief videos: members of the orchestra rehearsing for their Town Hall concert and a preface by Jeremy Price. There are reviews of the Orchestra's performances here and here an interview with Jeremy Price on the London Jazz News website here...


The Jazz Department's Twitter feed can be followed here.
Posted by Ian at 13:29:00 No comments:

Piano to the foreground

An Intimate Piano Session is now shipping. Mine arrived this morning... 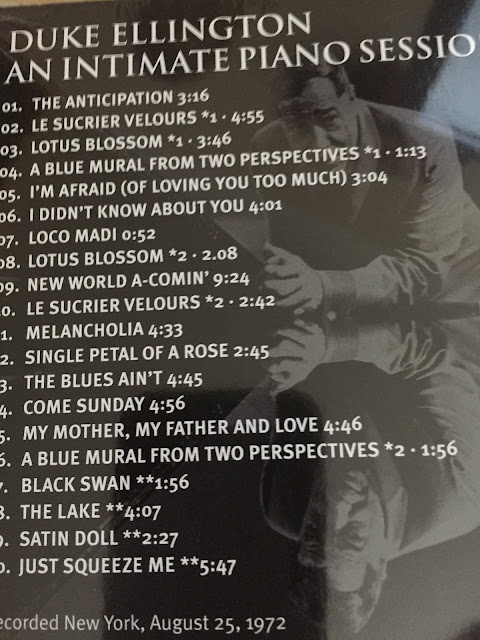 I am not on commission for this (!), but I can recommend Discovery Records. I was notified when it cam into stock, ordered yesterday and it arrived this morning. First class service all round! 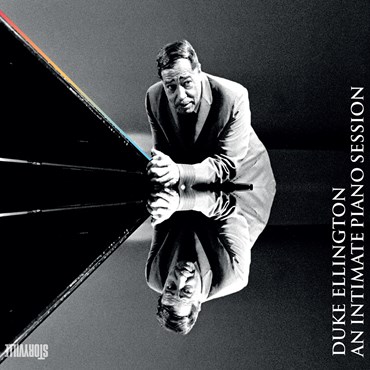 Previously unreleased music from the fingertips of Duke Ellington: An intimate 1972 session with the Duke on solo piano plus three bonus tracks from 1969.
The scene is 311 West 57 Street, New York, Mediasounds Studio A, Friday August 25th,1972. Duke Ellington was having an engagement with a smaller group at The Rainbow Grill, as he had had several times before, finishing the gig on the following night. But on the 25th, he chose also to go to the recording studio, just himself at the piano together with his two band singers Anita Moore and Tony Watkins, to record some pieces which were not played so often.
The recordings remained in his ”stockpile” until now, this being the first commercial issue of these beautiful pieces. The late Sjef Hoefsmit wrote about the session when he heard it back in 1994: ”It is difficult to understand why these magnificent recordings never have been issued”. Well, here they are at last – for all to enjoy!
Among the gems you'll find tracks such as two takes of the Billy Strayhorn composition “Lotus Blossom”, the Duke’s own “Le Sucrier Velours” and his emotional “My Mother, My Father and Love”. The latter was often performed with the Duke himself as a vocalist, reciting his own lyrics. No doubt the words meant a great deal to him, both personally and as part of his positive stories about the black communities in the USA.
The new CD contains three additional bonus tracks. On November 7th, 1969, Duke Ellington and his orchestra played two concerts in Rotterdam, in the famous De Doelen concert hall. The second concert of the evening was prolonged, as the public wouldn’t let Ellington go. So while the rest of the bandmembers left the stage, a quartet with Duke, Wild Bill Davis, bassist Victor Gaskin and drummer Rufus Jones stayed, and played four more numbers, much to the delight of the sold-out house. You can hear the whole band concert on the Storyville CD “Rotterdam 1969” (1018440), and here we offer the ”afterparty” music by the quartet.

And here are the discographical details:
25 August, 1972, New York City

Red, white and the blues... 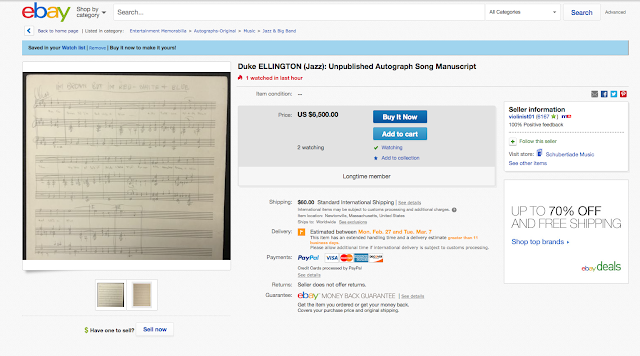 A real piece of Ellington history is presently for sale on Ebay here. Of this unpublished autographed letter, the vendor writes:

Original autograph musical manuscript in Duke Ellington's hand for a patriotic song titled "I'm Brown But I'm Red White & Blue," written out in pencil with a simple piano accompaniment. The lyrics read: "Say I'm Brown but I'm Red White & Blue / My folks are patriots thru and thru  / Why we've got lots of pride and we'll fight for our side / Cause we're Brown and We're Red White and Blue." This unpublished and unrecorded song, likely dating from the World War II era, shows Duke's pride in both his race and his country. 1 p. on manuscript paper; light toning and one very small tear to the right edge; easily legible and overall in very fine condition. 9.5 x 12.5 inches (24.2 x 31.8 cm).  Provenance: Duke Ellington Estate.

And from Leonard Feather's book, The Jazz Years: Earwitness to an Era (p.64), describing the first performance of Black, Brown and Beige, which took place at Rye High School on 22 January 1943, the night before its Carnegie Hall premiere:

"We were all stunned by the brilliance of Duke's 'tone parallel to the history of the American Negro,' as he subtitled it. Most of us had just one reservation: towards the end of the 'Beige' movement, Duke had written a lyric, pompously delivered by Jimmy Britton, declaring that: 'We're black, brown and beige but we're red, white and blue.' Such simplistic flag-waving seemed redundant, but I had already found out that Duke was stubborn about clinging to his convictions. Only after [talent agent] Bill [William] Morris, Dr. [J.T.] Mize [head of the music department at Rye High School], Dan James [Ruth Ellington's husband] and I had expressed our feelings strongly was it agreed that Duke did not meed to wear his Americanism on his sleeve. The lyrics were eliminated and 'B, B & B' ran forty-eight instead of fifty minutes the next night."

Six and a half thousand dollars is a little beyond my pocket (!), so the photographs will have to do... 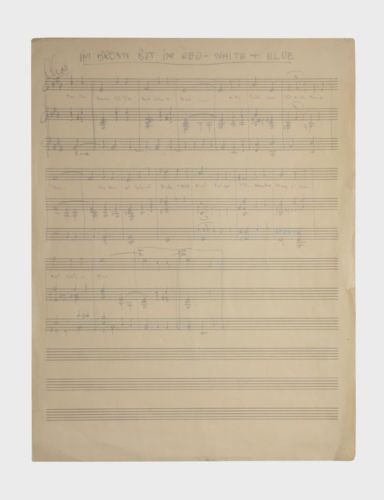 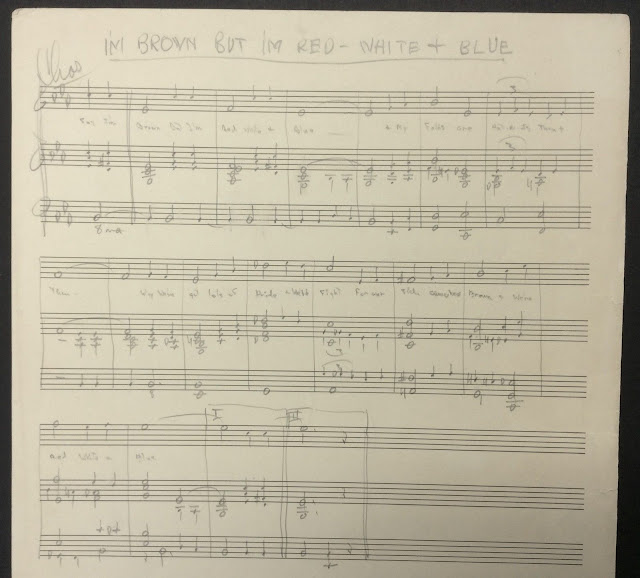 Have these Ellingtonian recordings been released in any other form than original shellac, I wonder? 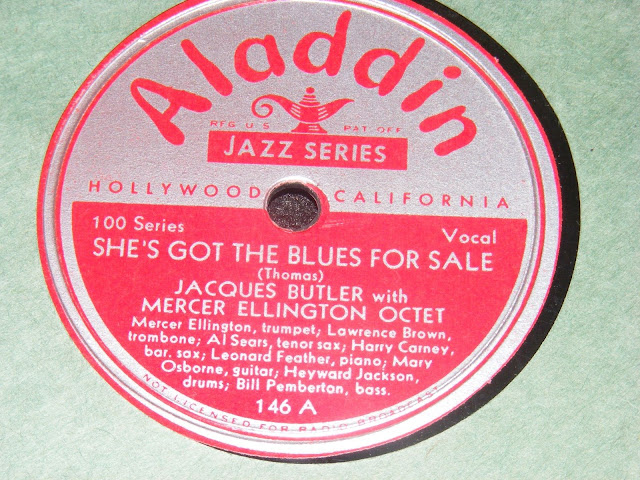 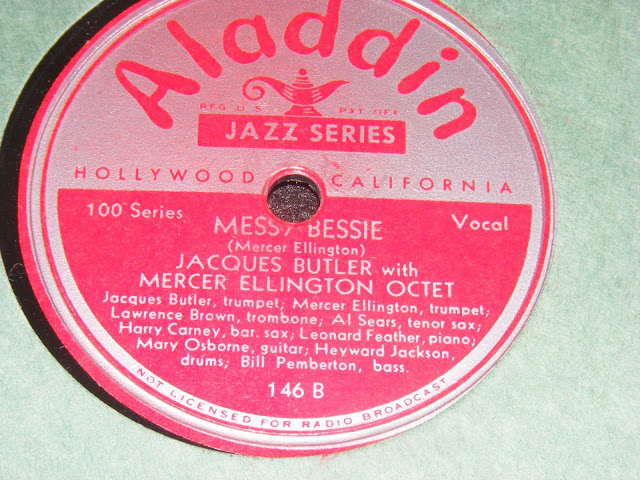