On a jingling jolly... 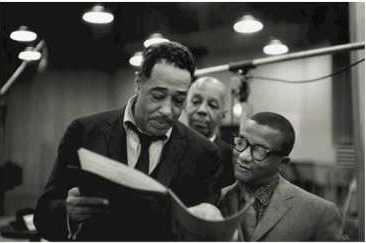 To the Royal Birmingham Conservatoire yesterday where Michele Corcella was working with students on arranging for big band with particular reference to Ellington’s  New Orleans Suite. It is Michele's transcription of same which will be performed by the Conservatoire's Ellington Orchestra this coming Monday evening.

The hour and a half seminar was fascinating. We learnt that Ellington's own method of notating his compositions was unique and understood by his copyist Tom Whaley (pictured above, looking on while Ellington and Strayhorn confer) to whom fell the task of writing out the parts for the expensive gentlemen of the orchestra. he was copyist for Ellington only. Arranging and composing companion Billy Strayhorn had to write out his work for the members of the Orchestra himself.

The reactions of the students was illuminating. In response to the opening of Portrait of Louis Armstrong, one student said "There's so much going on," which, in a nutshell, is one of the chief attractions of Ellington's music. Another student was concerned to place the recording in a timeline, finding the opening piano solo reminiscent of Thelonious Monk. "1970" was the reply, :Ellington was 71." The students were obviously amazed that a septuagenarian could produce such fecundity.

Michele Corcella is visiting in part because of the performance of his transcriptions of the suite this coming Monday. he will introduce the performance.

For those of us unable to attend, here is a little background to the genesis of these compositions. Tom Reney has presented Jazz à la Mode on New England Public Radio since 1984. His article, Duke Ellington and George Wein: Civilizing New Orleans may be found here.

And here is the podcast...

Thanks for the Beautiful Midlands... 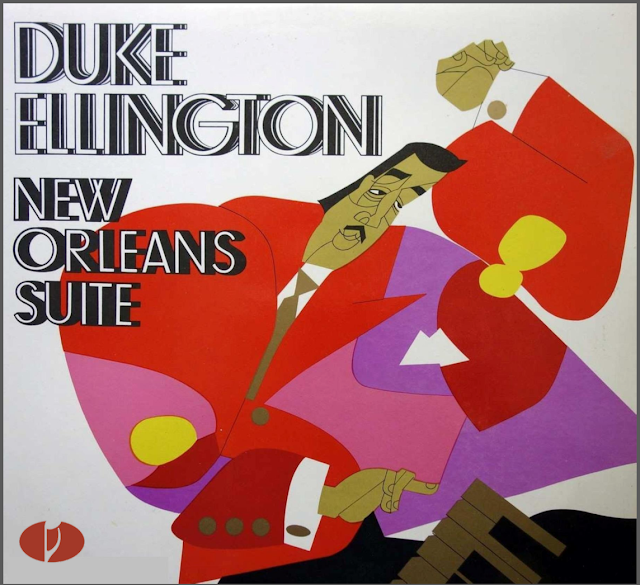 The Royal Birmingham Conservatoire's Ellington Orchestra under the direction of Jeremy Price will be performing The New Orleans Suite on Monday, 28 October, 2019.

The New Orleans Suite, originally commissioned for the 1970 New Orleans Jazz Festival is work which has great significance for Ellingtonians, as lead alto star Johnny Hodges died shortly after the first recording session; the band having to record the second session without him. This work also provides proof of the calibre of Ellington’s creative output in his later years, confounding critics who thought he had perhaps become formulaic since the collaborative years with Billy Strayhorn.


Scores and parts researched and edited from the original manuscript by Michele Corcella.

Tickets may be purchased here. 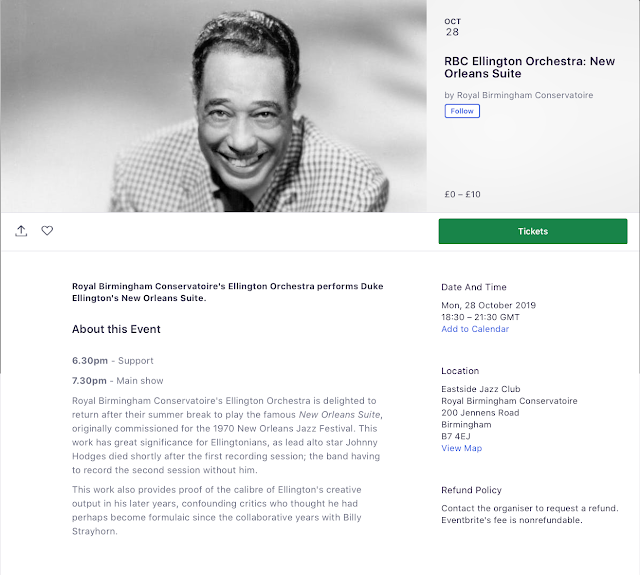 A second performance is also scheduled for Monday, 25 November.

From The Wall Street Journal... 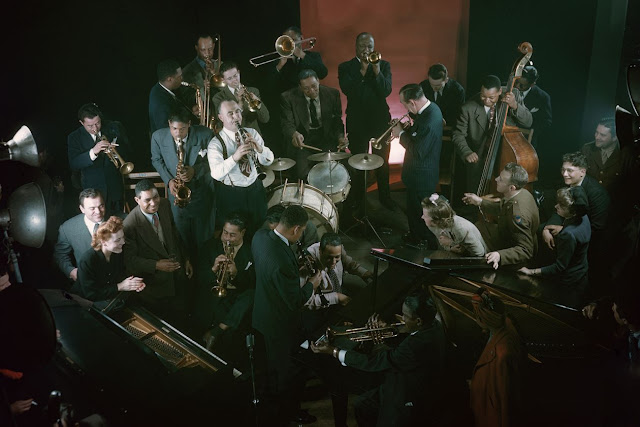 In 1999 the great pianist, bandleader and composer Duke Ellington would have been 100. As editor of a jazz magazine at the time, I marked the occasion with an essay by Don Byron, a clarinetist whose music to that point had included both his own bold original compositions and faithful readings of early Ellington works. Mr. Byron wrote of “reveling in” and “dreading” the Ellington centennial. The source of his dread? “A truckload of roasted corn heading for a concert hall near you,” as he put it; Ellington as “our own American Beethoven, ” proof of jazz’s legitimacy among great arts. Such canonization, he worried, would ensure that “the Ellington I know and love will probably never come to light.” His Ellington had a sense of “ugly beauty” and made a brilliant career of “sneaking in the outest stuff he could think of and, mysteriously, making people like it”—like the “skronked-out interlude that precedes Harry Carney’s baritone saxophone solo on ‘Jack the Bear.’ ” Mr. Byron wanted to remind readers that Ellington “was a true subversive. We need to hear him, not put him on a pedestal.”
Duke Ellington doesn’t show up until more than halfway through Ted Gioia’s “Music: A Subversive History”; Mr. Gioia has millennia to cover here, and besides, as the author of 11 books, including “The History of Jazz,” he has already written in illuminating depth about Ellington. But the author’s concise appreciation here aligns well with Mr. Byron’s. Ellington, Mr. Gioia writes, recognized early that “the peculiar path of jazz to respectability required it to maintain its own core values, holding onto the blues, syncopation, hot solos, and all the other calling cards of its craft.”

By Ted Gioia
Basic, 514 pages, $35
Ellington is among the large cast of subversives in Mr. Gioia’s sweeping study, from Olympian figures such as J.S. Bach to “the least well-known innovators in the history of music,” the enslaved courtesan artists of the Medieval Islamic world known as qiyan. For Mr. Gioia, Bach—whose bold music disturbed austere Lutherans enough that the composer had to write a defense to Leipzig’s city council in 1730—is “a striking case study in how prickly dissidents in the history of classical music get transformed into conformist establishment figures by posterity.” Likewise, Europe’s first acclaimed troubadour, William IX, Duke of Aquitaine, helped Western music throw off “the chains of clerical interference . . . to express the most intimate thoughts and feelings” through “secular song in the vernacular language.” Yet this was merely fulfilling aspirations first voiced centuries earlier by songs of the qiyan.
Mr. Gioia is fascinated by “outsiders and rebels” who too often “fall from view.” Above all, he’s focused on how “the institutions that preserve and propagate the inherited traditions of our musical culture” tended to “whitewash key elements of a four-thousand-year history of disruptors and insurgents creating musical revolutions.” The author aims to subvert our ideas about music history—essentially, Western classical tradition and its contemporary and popular offshoots—in part by removing its pedestals.
Though Mr. Gioia mostly adheres to common lineages—the links between the medieval period and the Renaissance, say, or the stream of African-American tradition from which flowed jazz, blues and rock—he challenges notions of progress based solely on aesthetic or stylistic innovation. “Infusions of energy” from the “disreputable songs” that “institutional power brokers” wish to exclude are, for Mr. Gioia, “the engine room of music history.” He characterizes music history as a cyclical power struggle with shifting battle lines. Some are obvious: between “highbrow and lowbrow sensibilities; between “the sacred and the vulgar”; between “the insider and the outsider.” Some reflect more complicated tensions: between a “feminine tradition” emphasizing “fertility, ecstasy, and magic” and a “masculine” one, celebrating “discipline, social order, powerful men, and group conformity”; between ideas about “music as a soothing lifestyle accessory” and “music as subversive force of change”; and between “music of order and discipline, aspiring to the perfection of mathematics and aligned with institutional prerogatives” and “music of intense feelings, frequently associated with magic or trance states, and resistant to control from above.”
Related to that last conflict, he identifies Pythagoras as “the most important person in the history of music,” whose innovation—a theory to “perhaps define and constrain musical sounds by the use of numbers and ratios”—has “done as much harm as good.” The harm was rendering “the pulse of music” little more than “a matter of counting,” and the forward motion of a performance mere calculation. “And that’s how matters remained until the African diaspora disrupted this complacent view in the twentieth century.” Mr. Gioia relates with sufficient emphasis how, in ragtime music, “the goal was to keep the rhythmic displacements coming, imparting a restless, off-kilter energy to music that no waltz or quadrille could match.” He even goes further, honoring the idea that such an approach represents a wholly different rhythmic conception, one of African descent. (Modern instructional books that impose bar lines on blues, he writes, distort “the very tradition they are trying to propagate.”)
Mr. Gioia’s claim that “the main plot in the narrative of popular music” for more than a century now has been “the descendants of African slaves rewriting the rules of commercial songs in every decade” is hard to dispute. Yet that point is complicated by his repeated use of the term “underclass” in this context ( Miles Davis, for instance, did not grow up poor). His narrative is sometimes tone-deaf: “Even within the most racist communities,” he writes, “audiences gradually came to prefer the very population they oppressed as purveyors of musical entertainment.”
Considering this book’s theme, it is curious that the author doesn’t mention the Association for the Advancement of Creative Musicians, an organization founded more than a half-century ago in Chicago whose stalwarts (including saxophonist, composer and Pulitzer Prize-winner Henry Threadgill ) embody Mr. Gioia’s own ideas about subversive ideas that overturn pedagogies and earn acceptance on their own terms. And given Mr. Gioia’s expertise in jazz, I was disappointed that his account of that art form effectively ends in the 1980s, with a “quest for respectability” that “got confused with mimicry of the past.” The jazz scene has moved on in notable ways since then.
Yet in other important respects, Mr. Gioia stays current. He connects Pythagorean theory (Western music’s “very first algorithm”) to the algorithms beneath our current music business, which leads to timely discussions of the “darker truth” that in recent decades “music technology started evolving faster than the musical styles themselves,” so that by now “the most powerful forces in music . . . view songs as mere content.” The author quotes Spotify’s 2015 annual report to shareholders: “We don’t sell music.” (He doesn’t need to utter the word “data.”) Mr. Gioia frames the historical significance of this situation, and its disenfranchising effect on both musicians and audiences.
I may not be as confident as Ted Gioia that “a new era of disruption” in music is around the corner, one that “robots and artificial intelligence will prove incapable of stopping.” Yet I share his belief that music’s strange magic can still reshape our world.
—Mr. Blumenfeld has written regularly about jazz for the Journal since 2004.
Posted by Ian at 08:04:00 No comments: